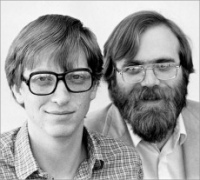 As you may know, we match entrepreneurs with other like-minded business partners and have done so successfully for many years now.

But I was asked the other day why people seem to prefer working with a business partner rather than splashing out on their own.

After all there are famous solo entrepreneurs aren’t there? Bill Gates, Richard Branson, Steve Jobs, the list goes on. Well, there may be some great entrepreneurs who have never had a partner, but most have.

In each case though, the roles and responsibilities were split according to the strengths of the individuals, with one of the founders assuming the public face of the company.

Starting a business with a partner is undoubtedly a way of sharing the work load and risk involved. It also allows for a greater coverage of the skills needed, with perhaps one being more comfortable technically and one more at ease with the commercial side.

I wrote recently about the reasons for having a business partner, from feedback that our members passed on.

There may at some stage be reasons why one or other of the partners wants to move on and as in any partnership there can be tensions at times. To give the partnership the best chance of success a partnership agreement should be put in place. This prevents misunderstandings and establishes a strong basis for a good working relationship.