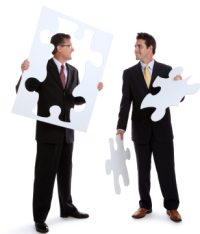 I had a call from a director of a business that I occasionally provide with mentoring to ask me to come round asap. Over the Xmas break he had been having second thoughts about carrying the activity on, even though it was profitable.

There was too much stress and he wasn’t getting on with his business partner. I was a bit surprised because they both contributed well to the company and had good complimentary skills, both were also quite reasonable people.

Delving into the cause of this crisis, it looked a matter of miscommunication between them.   Or to be exact it was one sided communication. The director I was with sent emails explaining his activity, making suggestions for the business and never got any response from his business partner.

His partner just didn’t see the need to respond, he was busy getting on with the job.

Because they worked in different offices there was no day-to-day chats round the coffee machine and because they had distinct responsibilities they had felt it was only required to meet monthly.

This wasn’t enough interaction to run a business together. Businesses can take all of your time, fire-fighting, dealing with customers and suppliers, so that there doesn’t appear to be the time to “needlessly” be communicating with others in your own business.

But regular physical meetings and prompt electronic communication to each other is vital. It helps team spirit, reduces stress and avoids misunderstandings. The interaction can also generate new ideas that often pop out of the woodwork seemingly just by magic.

Some large companies learnt this early on. I remember going to HP’s office “beer-busts” and Cray’s picnics. IT companies seem to have latched on to ways of informal employee interaction, as well as creating regular occasions for directors to met up.

This can apply also to smaller companies where it may seem that there is no need to plan such activity, since their small size should mean that there are plenty of opportunities to talk. However as was seen, demands on an individual’s time can make that difficult.

Additionally, there can be differing attitudes to communication. One being too verbose, the other too cryptic.

What we did in this case was to meet and thrash out a common attitude and business culture for communication. All agreed that any emails sent should be answered by return if possible, to schedule weekly Skype video calls and fortnightly get-togethers. Some of which could just be an opportunity to brainstorm ideas and ensure all were going in the same direction.

Having an open and friendly approach to internal communication, sharing issues in a no-blame, constructive way has to start at the top.

In small companies there should be far less politics involved than in larger organisations and this good communication and teamwork is an advantage that smaller businesses should have over some of their larger competitors.